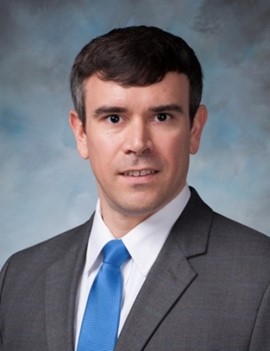 Mr. Rob Keisler is the Data Science and Analytics Engineering/5.6 Competency Lead for SPAWAR Systems Center (SSC) Atlantic. He serves as SSC Atlantic's leading technical expert for data science within SPAWAR and across the PEOs, the NR&DE, the Intelligence Community, and all customers to ensure consistency, efficiency, and commonality in solutions provided to the warfighter. During his career, he has been a pioneer for big data, data science, analytics, and autonomy technical strategy development efforts and applying those technologies towards increased readiness and warfighting effectiveness.

Mr. Keisler was selected in October 2017 to serve as a Senior Science and Technology Manager (SSTM) for SSC Atlantic where he entered Federal civil service in 2004. In his role, he provides technical strategic leadership and direction for the architecture, development, integration, and deployment of data-intensive digital capabilities, including the Internet of Things (IoT), machine and deep learning, and artificial intelligence (AI). He executes supervisory responsibilities for the data science and analytics engineering workforce to include resource planning and competency development for SSC Atlantic, and he supports workforce development strategies and goals for higher echelons including partnerships with national and international organizations, industry, and academia.

Mr. Keisler has served as a Technical Warrant Holder (TWH) for SSC Atlantic since 2011, most recently as Technical Area Expert (TAE) for Information Operations (IO) and Battlespace Awareness (BA) Data Analytics. He has supported numerous engineering efforts within information warfare, including leading design, deployment, and transition efforts for the Navy Tactical Exploitation of National Capabilities (TENCAP) Office and PMW-120’s Cryptologic Carry-On Program (CCOP). He has served in several technical leadership roles since 2012, including Supervisor for the Analytics Engineering Branch. 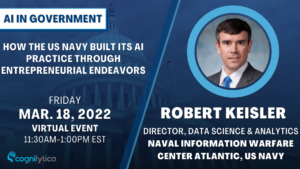 How the US Navy Built its AI Practice Through Entrepreneurial Endeavors