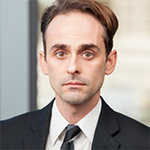 Justin Marsico is the Chief Data Officer for the U.S. Department of the Treasury’s Bureau of the Fiscal Service (Fiscal Service), where he is working to modernize the bureau’s management of data, including data governance and analytics. Justin also oversees the Fiscal Service’s delivery of data to the public, which includes USAspending.gov. In a previous role at Fiscal Service, Justin created the federal spending website called the Data Lab, as well as a new team dedicated to conducting enterprise-wide analytics.

Before Justin joined the Fiscal Service, he served as a senior advisor in Inspector General's office at the Department of Commerce, where he investigated ethics matters and employee misconduct. In addition, Justin worked as an analyst at the Consumer Financial Protection Bureau and previously at Treasury as an international economist. Justin holds master’s degrees from the University of Michigan in applied economics and public policy. He now lives in Washington, D.C.

In this interactive panel we’ll have folks from different agencies share how AI is impacting their organization and transforming their day to day work and talk about needs for enhancing AI skills in the government. 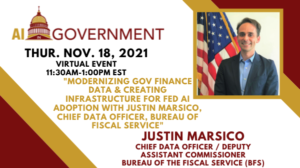