Chief Data Officer, US Air Force and US Space Force 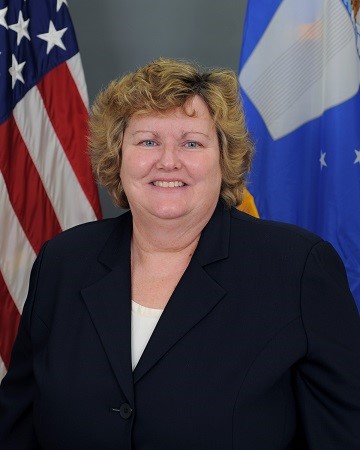 Eileen M. Vidrine is the Department of the Air Force Chief Data Officer, Headquarters, United States Air Force, Washington, D.C. She develops and implements strategies for enterprise data management, analytics, and digital transformation to optimize performance and drive innovation in and across all missions and operations.Ms. Vidrine began her government career in 1986 as an enlisted member of the U.S. Army and was commissioned in 1987 through the U.S. Army Officer Candidate School Program as a Transportation Officer. Later in her Army career, she was selected and integrated into the U.S. Army Acquisition Corps. She began her civilian career as a senior faculty member at the Joint Military Intelligence College and led the college’s technology transformation as the first Director for the Center for Educational Technologies.From 2006 to 2012, Ms. Vidrine served in various positions of leadership at the Office of the Director of National Intelligence (DNI) culminating as the Chief of Staff for the Assistant DNIfor Human Capital. In 2012, shewas selected to serve as the DoD Intelligence Community Enterprise Architect assigned to the Office of the Under Secretary of Defense for Intelligence, Human Capital Management Office (HCMO), and in 2014 assumed HCMO chief of staff responsibilities. In 2016, Ms. Vidrinewas selected as a White House Leadership Fellow, supporting the Office of Management and Budget and the Office of Personnel Management. After her fellowship she was detailed to the Executive Office of the President Office of Administration. Ms. Vidrine was appointed to the Senior Executive Service in June 2018. 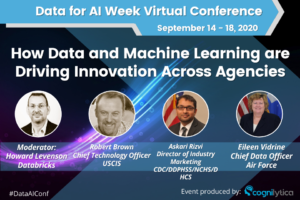 How data and machine learning are driving innovation across agencies

Learn how data and machine learning are driving innovation across agencies. 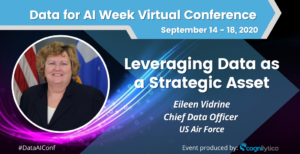 Leveraging Data as a Strategic Asset

By increasing data-use and literacy to improve the efficiency and effectiveness of decisions, readiness, mission operations, and cybersecurity, we are changing the Air Force’s culture to be a more collaborative organization. The Air Force is facing an ever-more disruptive battlefield (i.e., information warfare, malicious cyber activity, and political information subversion). Combating these threats requires rapid advancements in our data. To ensure we have the big data necessary to support AI autonomy, we need to take existing data stovepipes and change the culture toward visible and accessible data while still allowing for security and appropriate access. 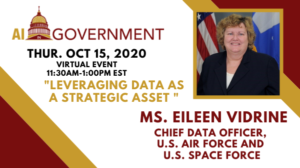 Leveraging Data as a Strategic Asset