About Dr. Eric A. Kihn

Eric is currently the Director of the National Centers for Environmental Information’s (NCEI) Oceanographic and Geophysical Science and Services Division.   During his 27+ years of service at NOAA he has been a researcher, group leader as well as a professional data manager at one of the largest environmental data archives on Earth.  Eric’s research interests led to the development of the Space Weather Analysis (SWA) a 15 year look at the space environment through data-assimilative models.  In addition, to its broader uses, the SWA produced scientific results describing solar cycle effects on space weather. He was the lead developer of the Space Physics Interactive Data Resource (SPIDR) and Environmental Scenario Generator (ESG), these systems are award winning data analytic tools built for NOAA and DOD respectively.

Eric is currently serving on the NOAA AI Executive committee as NCEI representative working to implement the newly adopted NOAA-wide AI strategy.  He previously served on the team during the development of the AI plan.    Eric’s non-NOAA support includes serving as the chairman of the electronic Geophysical Year (eGY) committee on best practices for scientific data stewardship, heading the World Data Service for Geophysics, and contributing broadly to the Earth System Information Partners (ESIP). 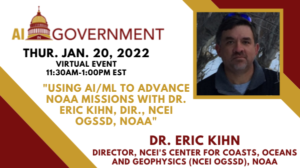