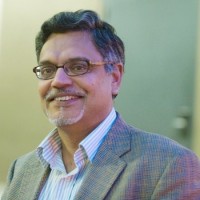 Dr. Chaitanya Baru is Senior Science Advisor in the Convergence Accelerator Office. He is there on assignment from the San Diego Supercomputer Center (SDSC), University of California, San Diego. He previously served at NSF, from August 2014-2018, as Senior Advisor for Data Science in the Computer and Information Science and EngineeringDirectorate. During that time, he co-chaired the NSF Harnessing the Data Revolution Big Idea(HDR)and also played a leadership role in the NSF BIGDATAprogram, where he was instrumental in establishing a partnership between NSF and the four major public cloud providers, viz, AWS, Google, Microsoft Azure, and IBM. He helped initiate theHDR DataScience Corps program, was an advisor to the NSF Big Data Regional Innovations HubsandTRIPODSprograms, and supported a series of workshops on Translational Data Science. He has served as co-chair of the NIST Public Working Group on Big Data and is currently co-chair of the Federal NITRD Big Data Interagency Working Group(BDIWG). Hewasaleadorganizer of the NITRDBDIWG workshop onOpen Knowledge Network, which led to the establishment of Track A in the Convergence Accelerator on Open Knowledge Network(OKN).

Dr. Baru has worked on translational and applied research in computer science and data science at SDSC since 1996, where he has served in a number of leadership positions. He has worked previously at IBM, on theDB2 Parallel Edition development team, and has been a faculty member in the EECS Department at the University of Michigan, Ann Arbor. He has an ME and Ph.D. in Electrical Engineering (Computer Engineering) from the University of Florida and a BTech in Electronics Engineering from the Indian Institute of Technology, Madras 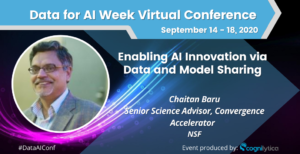 This talk will provide an overview of the NSF Convergence Accelerator program (C-Accel) and Track D of the Accelerator on Enabling AI Innovation via Data and Model Sharing.