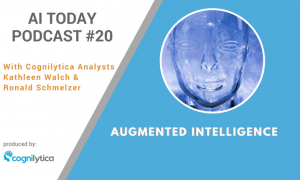 Many see the future of artificial intelligence (AI) as the replacement of human activities with fully autonomous agents, freeing up  or replacing existing human labor to provide greater value for the organization. However, for many companies, fully substituting autonomous agents for their human counterparts is not technically possible at the moment and also may not be feasible or practical. While AI technologies can fill many gaps and shows promise in many areas, for the most part, these technologies are not complete or flawless enough to fully perform many tasks currently done by humans.

That doesn’t mean, however, that AI is not applicable for these organizations. Instead of replacing humans with autonomous agents, businesses and agencies can see significant value in enhancing the capabilities of their existing staff and leveraging AI as a “force multiplier” that enables them to do more with their existing resources. This is the key idea behind the concept of Augmented Intelligence. In much the same way that robotics engineers have created exoskeletons that empower humans to perform activities that were previously impossible or required great effort or fatigue, so too can Augmented Intelligence systems provide assistance that can enable humans to perform information tasks that were previously impossible, too difficult, or require significant amounts of time and effort.